ESnet Menu
Home » About
About

A Platform for Science Discovery

The Energy Sciences Network (ESnet) is a high-performance, unclassified network built to support scientific research. Funded by the U.S. Department of Energy’s Office of Science (SC) and managed by Lawrence Berkeley National Laboratory, ESnet provides services to more than 50 DOE research sites, including the entire National Laboratory system, its supercomputing facilities, and its major scientific instruments. ESnet also connects to 140 research and commercial networks, permitting DOE-funded scientists to productively collaborate with partners around the world. 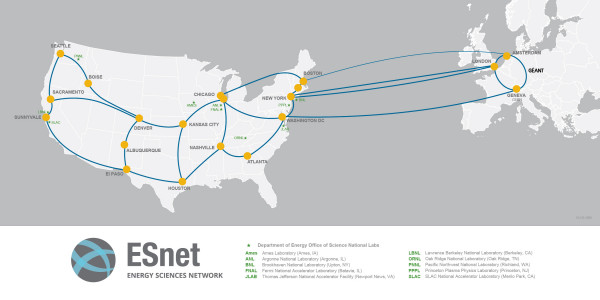 A Robust Network for Next-Gen Science

Spurred by the growth of large international collaborations in high energy physics, climate science, and genomics, the research community’s needs to manage and transfer large quantities of data are exploding in scope and complexity. Currently, ESnet carries around 20 petabytes of data monthly. Every four years, ESnet's average network traffic increases by a factor of 10. This growth is propelled by the rising tide of data produced by more powerful supercomputers, global collaborations that can involve thousands of researchers, and specialized facilities like the Large Hadron Collider and digital sky surveys.

ESnet6, now in the final stages of deployment, features 100–400Gbps optical channels and up to eight times the potential capacity of ESnet5.

In 2009, ESnet received $62 million in American Research and Recovery Act (ARRA) funding from the Department of Energy Office of Science to invest in its next-generation infrastructure to provide the necessary support for research discovery in this new era of data-intensive science. After three years of planning and deployment, ESnet5 was built in collaboration with Internet2, an advanced network, which connects the nation’s research universities. Leveraging its Recovery Act grant from the Department of Commerce, Internet2 and ESnet pooled stimulus resources to deploy a massive 8.8 Terabit network built using Ciena’s 6500 Packet-Optical Platform which the two organizations will equally share to serve their respective communities. To create the routing platform, ESnet deployed the Alcatel-Lucent 7750 Service Router. The new network provides an immediate tenfold increase (100 Gbps) in bandwidth to DOE research sites at the same cost of 10 Gbps connections – with the ability to now scale to 44 times the current capacity.

Compare the resolution of these two models of the early stages of the Universe. Approximately 13.7 billion years ago, the Universe was almost homogenous—meaning that every location in the cosmos was similar. Today, this is no longer the case. The modern Universe is rich in structures that include galaxies; clusters of gravitationally bound galaxies; galaxy super-structures called "walls" that span hundreds of millions of light-years; and the relatively empty spaces between superstructures, called voids. All the while, the Universe has been expanding, and in recent epochs, the expansion rate has been accelerating. This simulation starts from a nearly homogeneous Universe and reproduces the observable properties of today’s objects. Researchers are using this data to understand how the Universe has changed over billions of years.

In addition to its production ESnet5 network, ESnet has also created a national-scale network testbed, available to researchers and industry for experiments with new network technologies, protocols, and applications at 100 Gbps. The testbed supports research including multi-layer multi-domain hybrid networks, network protocols, component testing for future capabilities, protection and recovery, automatic classification of large bulk data flows, high-throughput middleware and applications, and as well as other innovative networking experiments. ESnet accepts new proposals to use the testbed every six months.

ESnet purchased almost 13,000 miles of dark fiber from a commercial carrier for DOE use. By creating a research testbed and lighting the dark fiber with optical gear, ESnet will enable network researchers to safely experiment with disruptive technologies that will make up the next generation Internet in a production-like environment at 100 Gbps speeds.