SWARPES sheds light on the scientific potential for remote microscopy

In the burgeoning world of nanotechnology, researchers see many potentially useful properties at the interfaces of materials called metal oxides—from magnetoresistance (the reason a hard drive can write to memory) to superconductivity (the basis of Magnetic Resonance Imaging (MRI) technology).

But to unlock the vast potential of metal oxide interfaces, especially those buried in subsurface layers, scientists need even more detailed knowledge of their electronic structure. And a new technique—called SWARPES, for Standing Wave Angle-Resolved Photoemission Spectroscopy—promises to deliver the goods.

The method, developed by an international team of researchers working at the Advanced Light Source (ALS) and remotely operating instruments at the National Center for Electron Microcopy (NCEM) via the Energy Sciences Network (ESnet), was described in Europhysics Letters. All three of these Department of Energy (DOE) facilities are located at the Lawrence Berkeley National Laboratory (Berkeley Lab).

“SWARPES allows us for the first time to selectively study buried interfaces with either soft or hard X-rays,” says Charles Fadley, a physicist who led the study. He holds joint appointments with Berkeley Lab and the University of California, Davis.

But SWARPES wasn’t the only novel technique to come from this work. This was also the first time that data collected and analyzed by a very remote user of NCEM—a world-class facility for electron microscopy and microcharacterization—has been published.  NCEM houses the cutting-edge transmission electron aberration-corrected microscope (TEAM), which uses a beam of electrons to magnify and image samples with a spatial resolution below 0.05 nanometers. That is roughly half the size of a hydrogen atom. And, it’s the reason hundreds of researchers from around the globe flock to NCEM every year.

Located at Berkeley Lab, NCEM’s TEAM is a shared resource that is available at no cost to scientists. It was designed and built by a DOE-funded collaboration that included researchers from Berkeley Lab, Argonne National Laboratory, Oak Ridge National Laboratories, University of Illinois, Urbana Champaign, as well as industry partners FEI and CEOS.

“Because the high-end TEAM microscope is extremely sensitive, it is standard practice to operate the instrument from another room. You have to hold the atoms in place long enough to get a good picture, so the slightest vibration from a moving person or noise near the microscope could impact the quality of your data,” says Jim Ciston, a staff scientist at NCEM and co-author of the Europhysics Letter paper.

For this study, Ciston wasn’t just operating the microscope from another room—he was more than 2,100 miles away at the Argonne National Laboratory in Illinois. “I happened to be traveling when the images had to be taken, and there was a small time-window to observe these samples,” he says. “My colleagues were in Berkeley and they had an allocation at NCEM. If I could not remotely operate the microscope, we wouldn’t have gotten our data.”

He notes that this work would not have been possible without key network connections from ESnet. “To operate microscopes from thousands of miles away we need reliable, uninterrupted network connections of about 100 to 150 megabits per second (Mbps),” says Ciston. “ESnet is currently moving data between DOE national labs at rates of about 10 to 100 gigabits per second (Gbps), so we are by no means a high-volume user, but it is also not a trivial matter to maintain this network speed across long-distances without dropping out. This is where ESnet has proved to be extremely beneficial.” 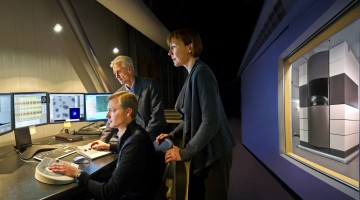 Most NCEM users—about 200 per year—currently travel to Berkeley Lab to conduct their experiments. But with the recent SWARPES accomplishment, NCEM staffers are optimistic about the future of remote microscopy for DOE supported science.

“This capability has the potential to democratize our user base. Access to NCEM is free, but you still have to get yourself here. This is a huge hurdle for small research groups with great ideas, but do not have funding to travel,” says Ciston. “Through the combination of high-speed network infrastructure and dedicated hardware, the remote operator can access NCEM from across the country or even the globe.”

This setup also allows researchers to stay on ESnet the entire time. “Theoretically, you could remotely access and operate NCEM instruments from your house, but you are limited by local area networks,” says Ciston.  “Because all of these DOE facilities are connected by ESnet, we know that we can maintain consistent long-distance connections without dropouts.”

Although remote microscopy is not necessarily a new idea, a robust infrastructure to support this work has not been established yet in the United States. “The high bandwidth and low latency performance enabled by ESnet has enabled remote microscopy to move from merely possible to truly useful,” says Ciston.

The DOE electron microscopy community is currently working with ESnet staff to set up permanent remote control stations at Argonne and Brookhaven National Laboratories that can be seamlessly folded into the existing user program. Eli Dart of ESnet, Nat Stoddard of Berkeley Lab’s Information Technology Division, and John Bigrow of Brookhaven National Laboratory are currently leading this effort.