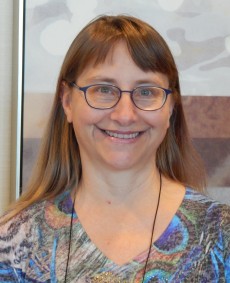 Julie Petersen of Berkeley Lab's IT Division was one of two women who attended the 2014 Technology Exchange conference through diversity support from ESnet.

To help boost the role of women in the networking community, ESnet is supporting two women attending the 2014 Technology Exchange conference being held Oct. 27-31 in Indianapolis. Julie Petersen of Berkeley Lab’s IT Division was one of the two women selected by ESnet, along with Arzu Gosney, an IT manager at Pacific Northwest National Laboratory.

ESnet and Internet2, co-organizers of the conference, aiming to increase the diversity of the research and education networking professionals pipeline, each supported two women’s participation at the conference.

“I've really enjoyed the conference today. I attended two talks this morning focusing on National Science Foundation-funded projects advancing networking technology for scientists,” Petersen wrote from the conference. “Software Defined Networking (SDN) is a very exciting field – it made me want to learn more about it.”

On Tuesday afternoon, she attended talk on diversity and inclusion by Karen Dace, Vice Chancellor for Diversity, Equity, and Inclusion at Indiana University – Purdue University Indianapolis.

“Her talk was followed by a very rich discussion about what we can do to have a positive impact on both diversity and inclusion in our own institutions,” said Petersen, who is the system administrator for Berkeley Lab Commons and supports other collaboration tools such as Google Apps. “It really made me appreciate Berkeley Lab's diversity initiative and realize how much effort is required to make the changes that are needed. Although I'm in a pretty positive environment in my group, the talk and discussion afterwards made me realize that everyone needs to be involved and I want to do that when I'm back at work.”

ESnet Director Greg Bell also participated in the session with Dace and others as they discussed “A Call to Action: Inclusion in Research and Education Networking Communities - What Are We Doing About It?”

“The lack of diversity in computer science is impoverishing our community and I’m concerned about our failure to achieve meaningful progress,” said Bell. “It’s an issue of equity, but it is also a matter of operational concern: we urgently need more talented engineers to design and manage critical cyberinfrastructure in the U.S.”