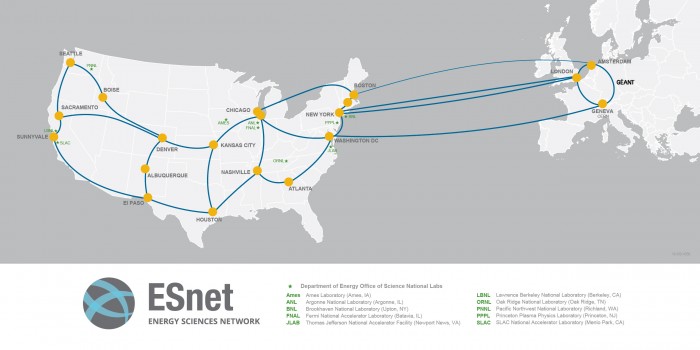 ESnet’s transatlantic extension will deliver a total capacity of 340 gigabits-per-second (Gbps), and serve dozens of scientific collaborations. To maximize the resiliency of the new infrastructure, ESnet equipment in Europe will be interconnected by dedicated 100 Gbps links from the pan-European networking organization GÉANT.
(See "The Technical Challenges of Transatlantic Connectivity" below.)

Among the first to benefit from the network extension will be U.S. high energy physicists conducting research at the Large Hadron Collider (LHC), the world’s most powerful particle collider, located near Geneva, Switzerland. DOE’s Brookhaven National Laboratory and Fermi National Accelerator Laboratory—major U.S. computing centers for the LHC’s ATLAS and CMS experiments, respectively—will make use of the links as soon as they are tested and commissioned.

“Particle physicists have been pushing the boundaries of networking technology for decades, and they will make use of our new extension almost immediately,” said ESnet Director Greg Bell. “Very soon, other data-intensive fields will benefit as well. We expect to see significant network traffic across the Atlantic from the astrophysics, materials science, genomics, and climate science communities.”

“The LHC will produce an ever increasing amount of data throughout its life and the ability to distribute this on a global scale is the key to its analysis,” said David Foster, who is deputy head of CERN’s IT Department and is responsible for international network strategy. “Close collaboration between Caltech and CERN, led by Harvey Newman, created the US LHCNet transatlantic networking capabilities for the U.S. physicists since the start of LHC operations and enabled a detailed understanding of the computing models. The European extension of ESnet will continue this work and provide increased levels of capacity to explore new approaches to analyzing the LHC data.”

The global Internet depends on undersea cables for data exchange between continents [seesidebar]. Because most large scientific collaborations are international in scale, such cables are especially important for research networks such as ESnet. In fact, national networks around the world have been collaborating to test high-speed undersea connections for the past 18 months. Last year, six organizations (ESnet, Internet2 and CANARIE in North America, with SURFnet, NORDUnet and GÉANT in Europe) deployed the world’s first 100 Gbps research link across the Atlantic. More recently, New Zealand’s REANNZ deployed an experimental 100 Gbps link across the Pacific.

ESnet’s transatlantic extension builds on the pioneering work of these projects. “Research networks around the world are collaborating to plan a more integrated global network architecture, and to upgrade intercontinental links as rapidly as possible,” said Bell.  “We support these goals, and our Atlantic extension is designed in harmony with them.”

ESnet installed its first European network node at CERN (the major laboratory outside Geneva that houses the LHC) in mid-September, and is now deploying other equipment necessary to bring the first link online by October.  The plan is for all links to be commissioned and in production by January 2015. The timing is important, because the LHC is undergoing upgrades and expected to resume operations next spring, at which point it will be generating significantly more scientific data every day.