Since he started working at the lab back in 1988, Mike Bennett has found himself in the middle of a number of interesting transitions. But come April 30, he’ll make his last one – transitioning into retirement.

When Bennett started as an engineering technologist at the Bevatron, one end of the control room was filled with analog equipment featuring knobs, dials, oscilloscopes and other devices. At the other end was a computer powered by an Intel 286 CPU. “It was an engineer’s playground, with technologies dating all the way back to the 1920s,” Bennett said.

But the Bevatron on its way out in the early 1990s and Bennett was given a choice of moving to the Advanced Light Source or joining LBLnet, the team responsible for the lab’s networking infrastructure. He took the networking path because “It was different and it was digital – I had been mostly working with analog.”

Indeed it was: the network at the time consisted of bulky coaxial cables strung throughout the buildings, with prominent drop boxes marking each network connection. When a change was needed, the cable had to be replaced. But by the mid-1990s, the lab was using telephone lines for its network, meaning you could just plug into the jacks in the wall. And upgrading was done by replacing a switch, not the wiring. “We were able to make advancements in the network more quickly and easily,” Bennett said.

In early 2000, Bennett joined ESnet, but after five months developed a case of “start-up fever” and took a job with Yipes Communications, an optical Ethernet carrier. But by the end of 2000, the company was on a downward slope. While stuck in traffic driving home one day in December 2000, Bennett called LBLnet lead Ted Sopher and was back at the lab in 2001. The next year, Yipes was in bankruptcy.

That same year, Bennett was also the member of a Berkeley Lab team that won the second “Bandwidth Challenge” at the annual SC conference in Denver. The team created a live visualization of a simulation of colliding black holes computed in real time at NERSC and the NCSA supercomputing center in Illinois, a feat requiring the integration of computational tools in many disciplines. The team achieved a sustained network performance level of 3.3 gigabits per second, thanks in part to a “secret” 10 G switch on loan from Force10 Networks that made its official debut at SC2001.

At SC2002, Bennett was again a member of the lab team that won its third consecutive Bandwidth Challenge before retiring from the competition undefeated. As a run-up to that event, Bennett, John Christman, John Shalf and George “Chip” Smith built a system that ran a scientific application to produce data on one 11-processor cluster, then sent the resulting data across a 10-Gigabit Ethernet connection to another cluster, where it was rendered for visualization. Using line-monitoring equipment from Ixia, the demonstration actually posted an unprecedented peak performance line rate of 10.6 gigabits per second. The total amount of real data transferred during 12 hours of trial runs and the actual demonstration was nearly 60 terabytes. 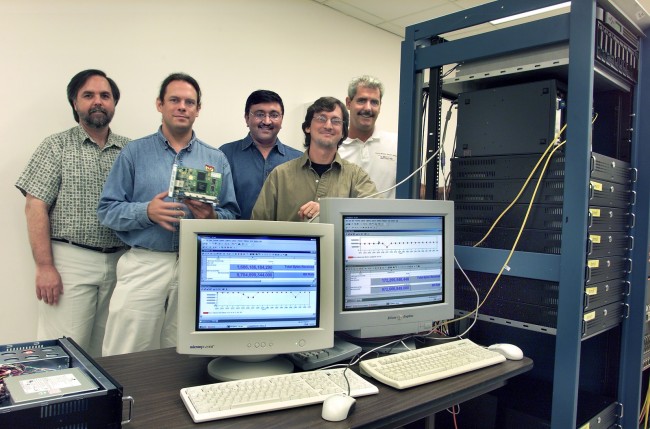 At the time, Bennett said that as far as he knew, it was the first real-world demonstration of 10-gig E capability. “What we are demonstrating is that it does work in the real world,” he said of the demo. “You can take one vendor's equipment and plug it into a cluster connected to a network and get that 10-gig level of performance.”

One of 2004's 50 Most Powerrful People in Networking

In early 2004, Bennett was named as one of the “50 most powerful people in networking” by NetworkWorldFusion, a Web-based magazine. His selection put him in some pretty prestigious company – the list also included the heads of such companies as Cisco, Juniper, IBM, Microsoft, SBC, Hewlett-Packard, Dell, Verizon, Symantec and others. The annual listing, which placed Bennett at number 40, “represents the role models of the network industry across the vendor, user and regulatory communities, as well as among standards setters and big thinkers,” according to the announcement.

“It was a total surprise,” said Bennett at the time after learning about the recognition when a colleague sent a message congratulating him. “I didn’t have a clue this was coming – it’s somewhat overwhelming, but it feels good to be listed in a group that includes Bill Gates and John Chambers.”

The next year, Bennett began working with the IEEE’s Ethernet Working Group. That led to a collaboration with Bruce Nordman a researcher in the Environmental Energy Technologies Division at Berkeley Lab who has long been examining the problem of energy use by idle electronics, including computers, printers, game consoles, etc. Even when the systems are in sleep mode, they are still consuming – wasting – energy. Nordman and his collaborator Ken Christensen, a faculty member of the University of South Florida, have developed various approaches for cutting power consumption in idle devices.

When Nordman learned that Bennett was involved with IEEE’s Ethernet Working Group, he contacted Bennett and things started rolling. Nordman gave a presentation on his work at an IEEE plenary meeting in San Francisco, which ultimately resulted in the formation of the IEEE 802.3az Energy-Efficient Ethernet Task Force. In 2010, the IEEE 802.3az Energy-Efficient Ethernet (EEE) standard was released for devices with Ethernet connections. The standards are expected to help save terawatts of otherwise-wasted electricity by automatically switching networked components to energy-saving modes when not in use.

“I’m really grateful for the opportunity to work with IEEE. I got to meet a lot of interesting people, as well as provide end-user input to the standards organization,” he said. “What feels good for me is now that the standards have been published, we’re seeing those features show up more and more in the equipment.”

Last year, Bennett was awarded an IEEE-SA Standards Medallion for his work in helping to create those energy-saving standards. He said he plans to continue his involvement with IEEE “as long as it’s fun and interesting” after his April 30 retirement.

During his time with LBLnet, Bennett witnessed the transition from a system with 10 megabits/second bandwidth to one with 10 gigabits of bandwidth. And when he moved over to ESnet in May 2012, LBLnet was looking ahead to 100 Gbps connectivity.

As head of ESnet’s Network Engineering Group, Bennett played an important role in the roll-out of ESnet’s 100 Gbps backbone network in November 2012. His job, he said, was to “protect his engineers” so they could focus on the transition, which meant he handled the things that could have distracted the team. And once the backbone was up, he was happy to see LBLnet connected to ESnet at 100 Gbps soon after.

Bennett said he reasons for moving to ESnet were similar to the ones that led him into networking originally. “The people at ESnet are really bright and they’re working with cutting-edge technology, so I accepted this opportunity to work with a different type of networking.”

But now, he says, it’s time to step back and take life easier. Up first on his agenda is a cruise with his wife to Alaska – a pure vacation as “the only other time I went to Alaska it was for work.” He’s also looking at attending future IEEE meetings, including the next one in Norfolk, Va. He’s also finishing a move into a smaller house now that his two kids have moved on.

Like many longtime employees who stay until retirement, he looks back on his 26 years as good ones. “It’s a great place to work – always new challenges in the support of science,” he said.