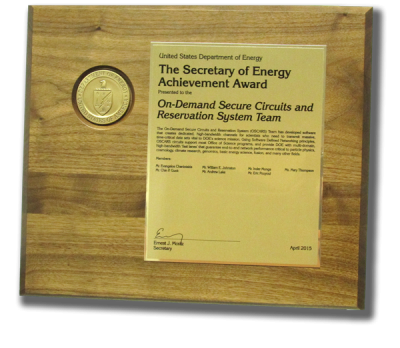 Energy Secretary Ernest Moniz has recognized ESnet staff members with a DOE Secretarial Honor Award for their development of OSCARS, the On-demand Secure Circuits and Reservation System. OSCARS is a software service that creates dedicated bandwidth channels for scientists who need to move massive, time-critical data sets around the world.

“This is truly a great honor for the ESnet team and we’re gratified by the Secretary’s recognition of the important role networking plays in scientific discovery,” said ESnet Director Greg Bell.

What makes OSCARS so useful is that it can automatically create end-to-end circuits, crossing multiple network domains. Before OSCARS, this was a time consuming process–in 2010, for example, ESnet engineers needed 10 hours of phone calls and about 100 emails over three months to do what one person can do in five minutes using OSCARS. The automation of this complex process—through a technique known as Software Defined Networking—is accelerating scientific discovery in high-energy physics and many other disciplines.

Being able to quickly and easily transfer massive datasets reflects the increasingly collaborative and international nature of science. Data-intensive science requires high-bandwidth networks interconnecting globally distributed instruments, facilities and collaborators – allowing them to function as if they are one system regardless of geographic location. ESnet engineers developed OSCARS to ensure networks can meet the time-critical needs of these experiments.

OSCARS'  unique capability was recognized in 2013 with an R&D 100 Award, an industry-wide competition rewarding the practical applications of science.