On an international scale, the Science DMZ is playing a critical role in magnetic fusion research. In July, scientists at General Atomics in San Diego successfully remotely controlled experiments running on the Experimental Advanced Superconducting Tokamak (EAST) in Hefei, China.

Founded in 1955, the high-technology firm General Atomics (GA) conducts research in magnetically confined fusion energy by operating the nation’s largest tokamak facility, DIII-D, which is funded by the Department of Energy’s Office of Science.

Inside the tokamak, a gas is heated and then compressed by powerful magnetic fields until it forms a plasma to 100 million degrees Celsius – hotter than the Sun. If the plasma temperature and pressure can be sustained, atoms in the plasma will fuse together and release more energy than is being put into the system -- meaning fusion could become an almost unlimited source of clean energy once the design is perfected. 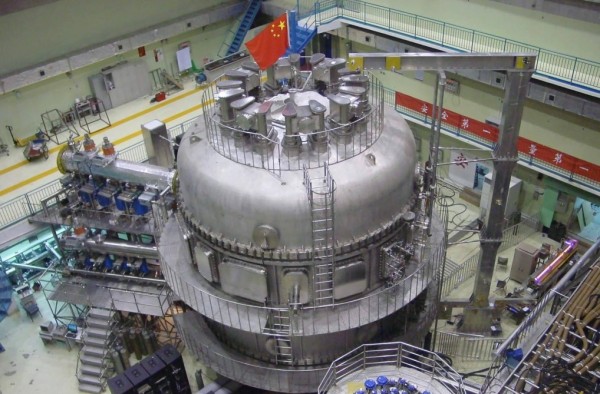 Aided by a Science DMZ to speed the flow of data, fusion researchers at General Atomics in San Diego are running experiments on EAST, the Experimental Superconducting Tokamak, in China.

Tokamaks like DIII-D and EAST are used for experiments to refine the design of the systems. Although EAST uses the same plasma control system developed for DIII-D, the Chinese tokamak is a superconducting system, which means its structure is cooled to very low temperatures for operation. This allows for longer pulse operation. And once the system is cooled to its operating temperature, it is highly desirable to operate the facility around the clock.

That led to the recent development of “Third Shift Demonstration” for DOE’s Fusion Energy Sciences program. When midnight strikes in China and the first two shifts wind down, it is 9 a.m. at GA’s San Diego facility, and time for third shift operation with a U.S. team. This time difference provides an ideal opportunity for remotely controlled experiments, yet, it also brought challenges in terms of moving and analyzing data.

David Schissel, head of the Computer Systems and Science Group in the Magnetic Fusion Energy Division of General Atomics, had learned about the Science DMZ from ESnet’s Eli Dart and thought the concept could benefit remote control experiments. For the project, General Atomics, using internal funds, deployed a prototype Science DMZ, which diverted the incoming data to a dedicated internal network.

We had rapid data movement from China to here, then distributed that data to collaborating scientists in the U.S.—David Schissel, General Atomics

“Fusion has a long history of using collaborative technology,” Schissel said, “and it’s a very interactive science. Visually, it’s like trying to put a jigsaw puzzle together before you understand what’s happening inside the tokamak.”

In the EAST experiments, the device is pulsed and plasmas are produced for more than 10 seconds every 15 minutes. If they can quickly obtain and analyze the data from one experiment, they can use that information to change the parameters of the next pulse, Schissel said. Such tweaks may include changing the shape of the confined plasma, increasing its density or localizing the heating.

“It’s a highly tunable system, but we typically only turn one knob at a time,” Schissel said. “And operating it from such a distance makes it all more difficult, especially if network latency slows the data. If you have a 15-minute window for a discussion before the next pulse and you don’t receive the data for 12 minutes, you don’t have much to talk about.”From some of the experiments, the data was arriving in just under one second via the Science DMZ, while the bulk of the data was being sent later for further visualization. “But the faster we move the bulk of the data, the faster we can look at it,” Schissel said.

Each of the 10-second experiments generates about 10 gigabytes of data, but there are plans to extend the pulses to 100 seconds, which is made possible by the superconducting coil design of EAST. This is a unique and valuable opportunity for fusion researchers in the U.S. as there are no present plans to build such a system here. That opportunity will also be very useful when the international facility, ITER, becomes operational.

The Third Shift Demonstration took more than two years to set up, Schissel said, but it validated the vision of remotely controlling a series of experiments over two days. The next goal is to conduct such a series of runs over a week, then possibly for a month.

“We didn’t just demonstrate that we can do it, but we demonstrated we could carry out meaningful science,” Schissel said. “We had rapid data movement from China to here, then distributed that data to collaborating scientists in the U.S.”