As he prepares to retire this month after more than 28 years at Lawrence Berkeley National Laboratory, Brian Tierney, head of ESnet’s Advanced Network Technologies Group, still remembers the exact moment when he knew where his career path would lead.

“I met Bill Johnston at San Francisco State and on the very first day of his Computer Graphics class, he told us ‘Anybody who gets and A in my class gets an internship in my group,’” Tierney recalled. “A light bulb went off and I knew I was going to get an A. I literally thought “That’s what I might do for the next 30 years.’”

He started in Johnston’s Graphics Group as a graduate student assistant in 1988 and a year later Tierney had become a career staff member. Over the years, the group was renamed the Imaging Technologies Group and then the Distributed Computing Department.

One of Tierney’s first projects was to create a 3D model of a human brain. Since there wasn’t any data easily available, he went to Tom Buddinger’s MRI lab at Berkeley Lab and had his own brain scanned, then wrote the software to build the model from his own data.

“We did a lot of image processing stuff, including what was a forerunner of Google Earth,” Tierney said.

As part of DARPA’s MAGIC gigabit network testbed, which included Johnston as well as NERSC’s Jason Lee, Tierney worked with visualization software developed by Stephen Lau (then of SRI, later of Berkeley Lab) to build the backend portion of a system that took 2D satellite imagery and laid on over 3D terrain models to create a realistic model of the earth.

“It required a blazingly fast network that had 155 Mbps of bandwidth, but the best we ever saw was 30 Mbps,” Tierney said.

Tierney’s introduction to networking began with a demo at the 1991 Supercomputing Conference in Albuquerque. The goal was to use a Cray Y-MP at the Pittsburgh Supercomputer Center and a Thinking Machines CM2 to do a rendering of the brain — converting the data into a graphical representation and doing it fast enough for interactive manipulation. The team turned to Berkeley Lab’s Van Jacobson to work on creating a version of the TCP that would work with the Cray operating system. Jacobson’s extension, known as TCP window scale, allowed larger data sets to be sent over faster networks and over greater distances.

“That project is was got me on this path,” Tierney said. 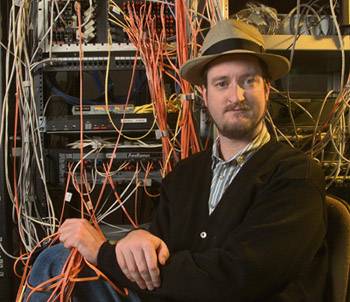 Brian Tierney in 1997, shortly after he joined NERSC..

When NERSC and ESnet moved to Berkeley Lab in 1996, Tierney was a member of the Data Intensive Distributed Computing Group, then the Advanced Technologies Group. Over the years, he also became involved in other projects, two of which helped shape efforts that form his legacy in the networking community.

First was the Grid Forum, which brought together developers, practitioners, and users of distributed computing (known as grid computing at the time). Out of that grew perfSONAR, a network measurement tool that measures network performance and helps diagnose problems that slow data down. Since it was first deployed as a prototype in December 2005, the perfSONAR toolkit has provided the research and education networking community with tools for end-to-end monitoring and troubleshooting of multi-domain network performance. Today, there are more than 2,000 public instances of perfSONAR deployed around the world.

Tierney helped get perfSONAR off the ground originally, and returned to it when he joined ESnet full time in 2008, just as Johnston was retiring.

“perfSONAR is the thing that I’m most proud of in my career,” he said. “I think it will be an enduring legacy.”

His other high-visibility project, fasterdata.es.net, started off on a more personal note. At the SC conferences in 2000, 2001 and 2002, Tierney was a member of a Berkeley Lab team competing in the Bandwidth Challenge, a round-the-clock, real-time competition to demonstrate applications and push the limits of the network. In 2000, the team won the “Fastest and Fattest” prize for best overall performance. The lab team also took top honors the next two years, then retired undefeated.

“Fasterdata started out as a page on the Distributed Systems Department server where I wrote down everything we learned about TCP tuning from the Bandwidth Challenge,” Tierney said. “One of the reasons I created it is that I don’t have a good memory for details, so it was my personal reference.”

Since then it has grown and grown and now numbers over 100 pages of material, with the page count expanding with the addition of information on the Science DMZ. Thousands of users from around the world visit the site each week.

One of his groundbreaking projects didn’t catch on quite as strongly, but he’s still partial to it. NetLogger (short for Networked Application Logger) is a method for performing detailed end-to-end analysis of distributed applications, making it extremely useful for detecting bottlenecks, and debugging and tuning distributed applications. The challenge, he said, is getting researchers and engineers to add NetLogger to their instrumentation codes.

Getting a new perspective

On Sept. 1, 2000, Tierney started a yearlong sabbatical at CERN in Switzerland, working as a scientific associate in CERN's Information Technology Division. “On the day I arrived, they were beginning to look at grid computing”, Tierney said. “As I was already familiar with Globus and GridFTP, I was immediately sucked into that project and helped introduce CERN to Grid FTP.” While at CERN, he spent 70 percent of his time on projects there and 30 percent of his time on Berkeley Lab projects.

“It was an extremely valuable experience both personally and professionally and it opened a lot of doors,” he said. “It was the high point of my entire career and I think we as an organization would benefit from more employees taking sabbaticals, or even staff exchanges with other labs.”

When he returned to the lab, funding for several projects he had been working was ending and he started looking around for new things to do. One of those was working with “insanely smart” Vern Paxson and Robin Sommer on Bro, the lab’s intrusion detection system which monitors incoming network traffic for malicious intent and then triggers steps to block and analyze the traffic.

After Bill Johnston was named ESnet director in 2003, he asked Tierney to help with the twice-yearly networking requirements workshops ESnet held with the six program offices in DOE’s Office of Science. “That’s how I got my foot in the door,” he said, “and then I let it be known I’d be interested in making a move.”

Five years later, Johnston announced his plans to step down as head of ESnet and retire from the lab. One of his last official tasks was to hire Tierney as a full-time ESnet staff member.

“I have long considered Bill J. as just a fantastic mentor – I wouldn’t be where I am without his mentorship,” Tierney said. “He gave me just the right amount of independence, introduced me to the right people and inspired my creativity.”

By the end of June, Tierney and his wife Christine will have moved out of their San Francisco condo and into their house in Grass Valley. But they won’t get too settled as they have one-way tickets to Japan for Aug. 23.

“We have pretty big plans,” he said. “We plan to travel for about six months, after Japan heading to Vietnam, Laos, Cambodia, Myanmar and then we’ll see. We don’t have any specific agenda.”

After that, they are looking to buy a small camper and take a four-month trip to Alaska. Tierney also plans to keep in touch with colleagues as a lab affiliate.

“Don’t expect me to disappear completely,” he said. “I hope to be around a little bit, but not too much.”

About the DOE Office of Science

The Office of Science is the single largest supporter of basic research in the physical sciences in the United States, and is working to address some of the most pressing challenges of our time.  For more information, please visit science.energy.gov.”

About ESnet and Berkeley Lab

ESnet provides the high-bandwidth, reliable connections that link scientists at national laboratories, universities and other research institutions, enabling them to collaborate on some of the world's most important scientific challenges including energy, climate science, and the origins of the universe. Funded by the DOE Office of Science, ESnet is managed and operated by the Scientific Networking Division at Lawrence Berkeley National Laboratory. As a nationwide infrastructure and DOE User Facility, ESnet provides scientists with access to unique DOE research facilities and computing resources.

Lawrence Berkeley National Laboratory addresses the world’s most urgent scientific challenges by advancing sustainable energy, protecting human health, creating new materials, and revealing the origin and fate of the universe. Founded in 1931, Berkeley Lab’s scientific expertise has been recognized with 13 Nobel Prizes. The University of California manages Berkeley Lab for the U.S. Department of Energy’s Office of Science. For more, visit http://www.lbl.gov.  DOE’s Office of Science is the single largest