ESnet Summer Students: Mentoring The Next Generation of Network Engineers

The student interns who come to Lawrence Berkeley National Laboratory (Berkeley Lab) each summer have a lot to offer: They are motivated, energetic and can bring a pair of new eyes to a project. But they are also important because they represent the next generation of researchers and engineers. To capture the best talent, the Department of Energy’s ESnet (Energy Sciences Network) uses its internship program to create a student-to-staff pipeline for Berkeley Lab, where ESnet is located.

“I am very interested in creating a diverse pipeline that allows student interns to become full-time career staff at ESnet,” said Patricia Giuntoli, area lead for Networking and Systems at ESnet. “Diversity is important in order to have unique and different views. Sometimes solving a problem or getting to a new place can be challenging and having people with different experiences and views can help create unique solutions.”

This summer, four students have been working at ESnet. Three of them—Hocine Mahtout, from the Bordeaux Graduate School of Engineering and Kunal Singh and Aaron Jia, from UC Berkeley—are working with ESnet Research Scientist Mariam Kiran on a project that employs machine learning and parallel computing to optimize network traffic and path allocation. In 2017, Kiran received an Early Career Award to support this work.

Mahtout is also working on a separate project with Kiran. A few years ago, Kiran started working on iNDIRA, a software package that translates a user command written in English (not a programming language) into network commands. After seeing Kiran talk about iNDIRA in a presentation, Mahtout independently contacted Kiran to discuss ways they might work together. They later launched a second version of the project called EVIAN that incorporates machine learning to improve future interactions with users. 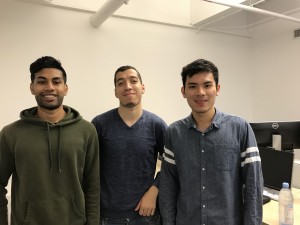 “We did not intend on creating a new version of iNDIRA, but because Mahtout was so excited about working on it we now have a second version of iNDIRA coming out,” Kiran said. “As an intern, you see the environment and the types of science happening here and making a difference to everyday life and it’s so exciting that it makes you want to be part of it all.”

Meanwhile, the fourth student — John Christman, a senior from the University of Nevada, Reno whose father, John Christman Sr., recently retired from ESnet after 29 years — is working with ESnet Network Engineer Nick Buraglio to improve ESnet security and traffic analysis software. Christman, who also worked at ESnet last summer doing network traffic analysis, is working with the monitoring group to improve ESnet’s networks by getting new servers and networks up and running and securing them from cybersecurity attacks. 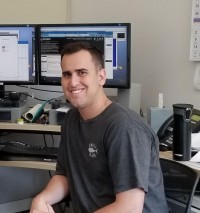 “John has been tasked with working on the prototyping team for a next-generation management network design,” said Nick Buraglio, ESnet network engineer and Christman’s mentor. “John has excelled at both the tasks of leading pieces of a larger project as well as operating as a high performing team member. He has gained experience with completing deliverables that are critical pieces of a larger project.”

At the University of Nevada Reno, Christman is majoring in information systems. He plans to get his masters degree in this subject at UC Berkeley.

“I’ve learned an incredible amount while I’ve been here. From hearing presentations from world-class scientist to gaining hands-on experience, this summer has been filled with new insights on cutting-edge information,” he said. “My expectations have not only been met but exceeded. I look forward to coming in every day, as each day brings something new and exciting. I’m truly blessed to be interning here this summer.”

One of ESnet’s goals with the summer student program is to give students the opportunity to gain a working knowledge of ESnet that might lead them to join the ESnet team once they graduate. Several ESnet employees, including Kiran, Sowmya Balasubramanian and Scott Richmond, began their careers at the lab as interns.

“My goal was to educate myself and gain practical experience in network operations so I could leverage that into a career in industry and the laboratory was a well-respected place that was accepting interns,” said Richmond, who is now a network engineer at ESnet. “After spending nearly a year at ESnet as a student assistant, the training and education I received from my mentors and colleagues in software, hardware and networking allowed me to transition to a full-time career as a Computer Systems Engineer with ESnet, working in the Operations and Deployment group.”

Some of this summer’s interns may just follow suit.

“This internship has gotten me thinking about what I want to do in the future,” said Jia. “I had never had formal work experience before, and this gave me a great idea of what it’s like.”