ESnet staff will be working with other research organizations and vendors to support a series of demos at the forefront of networking, including the use of new hardware and software. Here are three key demos supported by ESnet:

SENSE is building smart network services to accelerate scientific discovery in the era of ‘big data’ driven by exascale computing, cloud computing, machine learning and AI. The SENSE SC18 demonstration in the Caltech and University of Maryland booths (1413 and 4211) showcases a comprehensive approach to request and provision end-to-end network services across domains that combines deployment of infrastructure across multiple labs/campuses, SC booths and WAN with a focus on usability, performance and resilience.

A SENSE testbed consisting of network and end-system resources has been deployed across DOE laboratories, including Fermilab and Argonne National Lab and the National Energy Research Scientific Computing Center at Berkeley Lab; facilities at Caltech and the University of Maryland; MAX (the Mid-Atlantic Crossroads) and ESnet. To control network resources, the SENSE system interacts with production provisioning system of ESnet and other regional and site networks. To control end-systems, SENSE software is deployed at the end-sites.

The SENSE demonstration at SC18 uses this persistent testbed and adds resources on the exhibit showroom floor at the conference. As shown in the figure below, the SC18 resources include data transfer nodes (DTNs) deployed in the Caltech and University of Maryland booths. Connections to the SC18 SCinet infrastructure provide multiple 100 Gbps connections back to the SENSE testbed. This infrastructure will be utilized to demonstrate the end-to-end SENSE services and includes high-speed data transfers and provisioning services. 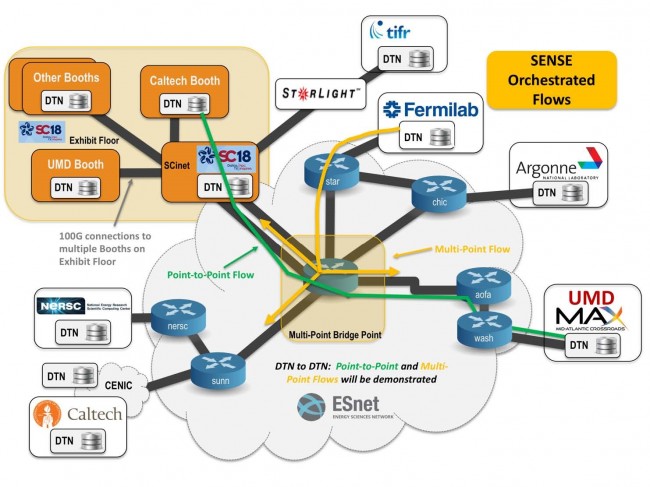 Topology of the SENSE demonstration at SC18

Turning on the Faucet to Improve Data Flows

ESnet is collaborating with the University of Waikato in New Zealand and the faucet Foundation on a very large, never-before-done deployment of the Faucet controller, which was created to bring the benefits of software-defined networking (SDN) to a typical enterprise network and has been deployed in various settings.

SDN is an emerging technology that decouples the network control plane from the actual data which flows across the network on the data plane. By doing so, SDN introduces the concept of programability into the network, allowing application owners and network operators to customize network software to meet their needs.

AT SC18, the University of Waikato and the Faucet foundation are working with ESnet, Allied Telesis, Cisco, NoviFlow and CyberReboot to build a multi-terabit Faucet network which will be used as part of the SCinet production network hosting over 10,000 attendees from all over the globe.

“Not only is this proof of the ability to scale Faucet but is also the first production multi-vendor 100G SDN network and hybrid p4 – openflow,” said Angela Nash, Chief Information and Operating Officer at the Research and Education Advanced Network of New Zealand (REANNZ). “That's impressive stuff!”

Faucet was originally developed by REANNZ and the University of Waikato and the effort has been joined by others, including ESnet. In March 2017, Berkeley Lab hosted the first Faucet conference and a real-time plug-fest in which seven vendors of network equipment came together to successfully test the interoperability of Faucet.

As part of the Network Research Exhibition (NRE) at SC18, ESnet is collaborating with Indiana University (IU), Ciena and Internet2 to power the fastest network ever built for research and education.

The new network will debut at SC18, in Dallas November 11-16. It will support IU’s Research Technologies group as they demonstrate use of the Lustre file system across the wide area from 100G to 400G, using an end-to-end link from Dallas to Bloomington.

For the SC18 demo, the Monon400 will run over a dedicated 100G circuit provided by the U.S. Department of Energy’s science network, ESnet, stretching from Chicago to Dallas. Indiana GigaPOP will use this circuit combined with three shared 100G circuits, two from Internet2 and one from CenturyLink, to complete the 400G capacity.