ESnet is helping to create scalable quantum communication networks that will support applications across science, industry, and national security

As modern computers begin to reach the limit of their processing power, quantum computing has the potential to solve more specialized problems that require immensely robust computing. With that potential capturing the imagination of many, a consensus is building that a communication system using quantum mechanics represents one of the most important technological frontiers of the 21st century. To harness the full promise of quantum computing and sensing, we need to build scalable quantum communication networks that can support applications across science, industry, and national security. Scientists now believe that the construction of a prototype “quantum Internet” will be within reach over the next decade.

Toward this end, on July 23 the U.S. Department of Energy (DOE) unveiled a report that lays out a blueprint strategy to accelerate research in quantum science and technology, with an emphasis on the creation of a quantum Internet. “The Department of Energy is proud to play an instrumental role in the development of the national quantum Internet,” U.S. Secretary of Energy Dan Brouillette said in a news release. “By constructing this new and emerging technology, the United States continues with its commitment to maintaining and expanding our quantum capabilities.”

In support of this and related efforts, the Energy Sciences Network (ESnet) - a DOE Office of Science user facility managed by Lawrence Berkeley National Laboratory - is actively tracking multiple quantum networking projects and collaborating with the research community to help lay the groundwork for scalable quantum communication networks and a quantum Internet. In this interview with ESnet Director Inder Monga, he talks about the future of quantum networking and its role in facilitating quantum information science across the DOE and beyond.

How will the DOE’s quantum networking blueprint impact the development of quantum communications and applications?

Researchers believe that a quantum Internet could have a profound impact on a number of application areas critical to science, national security, and industry. Application areas include upscaling quantum computing by connecting distributed quantum computers, quantum sensing through a network of quantum telescopes, quantum metrology, and secure communications. 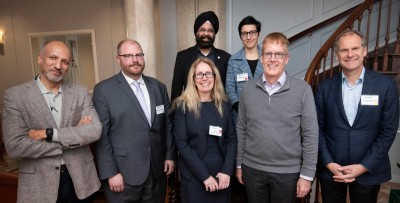 DOE’s 17 National Laboratories will serve as the backbone of a proposed nationwide quantum Internet, which will rely on the laws of quantum mechanics to control and transmit information more securely than ever before. Earlier this year I co-chaired the first Quantum Internet Blueprint Workshop, designed to begin laying the groundwork for this complex undertaking. (Details can be found in the workshop report released July 23.) This meeting was a great first step in articulating what challenges need to be addressed in order to create a quantum Internet with a coordinated research roadmap. The diversity of attendance at the meeting itself was an example of how such grand challenges can be tackled with collaboration across DOE national labs, universities, industry, and various government entities, including  NASA, NIST, NSF, and others.

The workshop explored the specific research and engineering advances needed to build a quantum Internet in the near term, along with the path to move from today's limited tabletop experiments to a viable, metro-to-wide-area, secure quantum Internet. Participants identified four priority research opportunities and five key milestones that must be achieved to build the foundation for a quantum network:

What role will a high-speed, high-performance, dedicated science research network like ESnet play in facilitating the adoption of quantum technologies?

ESnet is a DOE user facility that connects all of the DOE national labs with a high-speed “classical” network built over leased fiber pairs that span more than 15,000 miles nationwide. In order to build an operational and manageable quantum network, we need to research and build new quantum devices and build new protocols and control systems to integrate, control, manage, and monitor those devices and systems to achieve end-to-end communications. While the classical networks will not have access to the secure data being carried by the quantum channel, using the classical network for control and management is critical to a quantum network’s operational success.

ESnet not only brings the existing nationwide infrastructure and connections to National Labs, it also brings its operational expertise and protocol knowledge to work hand-in-hand with the quantum physicists, scientists, and device and system manufacturers to ensure the right mechanisms are in place to realize DOE’s vision of a quantum Internet. 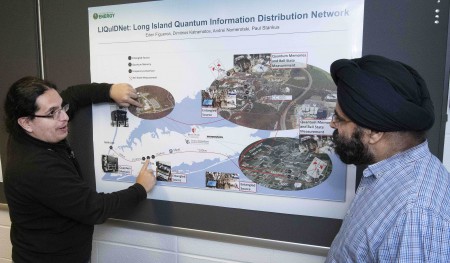 What research is ESnet helping to enable, and what more still needs to happen to make long-distance quantum communications a practical reality?

Just like the first modems developed in the 1960s leveraged the well-established copper-based telephone network to connect teletype terminals and send data at 110 bits per second (compared to 800 gigabits-per-second modems over fiber today), quantum networking technologies are at an early stage of development. Most current quantum networking research uses photons over either fiber or free-space as the preferred medium of transmission.

At this point, there are many significant investments in small but highly collaborative quantum networking research and prototype deployments in different areas of the country, including Brookhaven/Stony Brook, MIT/Harvard/Lincoln Labs, ANL/University of Chicago, FermiLab/Caltech/JPL/Northwestern, Oak Ridge National Laboratory, and more.

As researchers across the nation build and test fundamental technologies needed to build the quantum internet, ESnet is helping build the infrastructure and provide support to those projects. For example, ESnet engineers worked with researchers at Brookhaven and Stony Brook to test quantum entanglement across the Stony Brook campus leveraging existing ESnet fiber pairs, achieving long-distance entanglement of 18 km using unique quantum entanglement sources and an existing ESnet communications fiber network. Since that initial work, Stony Brook and Brookhaven have established an 80-mile quantum network testbed. ESnet is also working closely with Stony Brook, FERMI, ANL, and Caltech researchers to see how we can support the infrastructure build to expand the reach of their quantum networking research, and we are in conversation with other exploratory testbed projects.

One of the key building blocks to scale these regional demonstrations is the quantum repeater. The repeater is an essential piece of the quantum network that will enable the transmission of quantum information across large distances. Many of the testbeds mentioned above are aggressively building breadboard versions of the quantum repeater, competing with other nations to create a first viable repeater system that can be deployed widely. Each of them has a different scientific approach to the problem, for example, the use of quantum memories, and that diversity of research ideas at this stage is extremely important for us to find the right solution that will scale.

What do you see as the next steps to realizing the goal of building a nationwide quantum Internet?

The blueprint report describes in detail the five key milestones that will demonstrate progress toward the ultimate goal of building a nationwide quantum Internet. Here I provide my own perspective on the next steps that will help us realize this goal.

First, we need capable quantum network devices that blend the quantum protocols with classical control. In addition to the grand challenge of building a deployable quantum repeater, an ecosystem of quantum devices from efficient quantum memory; transducers for quantum sources; high-speed, low-loss quantum switches; and much more are needed. Many research labs across the U.S. are working on these technologies, and the first big milestone will be to take these devices, and reliable quantum entanglement/distribution, from laboratory-level readiness to acceptable field-level readiness. Following the “team science” philosophy of Berkeley Lab, this step will not just involve the researchers and physicists but will require collaboration with engineers who have experience deploying and managing components in the field.

Second, once we have deployable and supportable components, we need to gain experience running and operating these devices. It is wonderful that Brookhaven, Fermi, Argonne, UChicago, Northwestern, Oakridge, Caltech, MIT, and others have built or are planning to build capable free-space and/or fiber-based regional testbeds. We can also think about expanding these testbeds using existing dark fiber from Berkeley to SLAC to Caltech, or Brookhaven/Stonybrook to MIT/Harvard, or the Argonne/Fermi/Chicago regional testbed to Oakridge as the capabilities of the devices expand.

In addition to physical devices, quantum entanglement, and teleportation techniques, the classical networking protocols and techniques to control, manage, and operate the quantum network are extremely important. At this stage of development, it is critical to let a thousand flowers bloom. ESnet, with its practical experience, can help design testbeds, connect these testbeds to quantum applications, and support end-to-end tests to help the researchers focus on the techniques that are most viable and easily scalable across the nation. This principle of co-design has been impactful across the DOE Office of Science projects and I hope will be applied to the quantum Internet efforts as well.

Finally, I remember working on one of the leading multi-protocol routers in the 90s with protocols like X.25, Appletalk, IPX, OSI, and many others that have now faded away. With the many approaches to quantum routing and potential protocols to control these devices, we will need a testbed that allows neutral testing of these various research approaches and maybe even determines the interoperability of the various free-space, satellite, and fiber-based techniques. We will also need to build strong collaborations not only between the DOE labs, quantum centers, and the science applications, but also with other agencies like NASA, NIST, NSF, and others that have investments in this space. This is the only way we can leverage the knowledge and expertise of the broader scientific community to reach the vision outlined in the Quantum Internet Blueprint report.