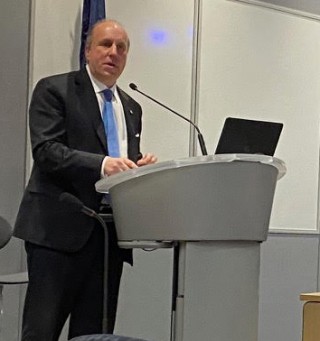 Paul Dabbar, Under Secretary of Energy for the DOE's Office of Science, gives the welcoming remarks at the Quantum Internet Blueprint Workshop, held Feb. 5-6 in New York City.

The U.S. Department of Energy’s Office of Science, under the leadership of Under Secretary of Energy Paul Dabbar, sponsored around 70 representatives from multiple government agencies and universities at the first Quantum Internet Blueprint Workshop, held in New York City Feb. 5-6. The primary goal of the workshop was to begin laying the groundwork for a nationwide entangled quantum Internet.

Building on the efforts of the Chicago Quantum Exchange at the University of Chicago, Argonne and Fermi National Laboratories, and LiQuIDNet (Long Island Quantum Distribution Network) at Brookhaven National Laboratory and Stony Brook University, the event was organized by Brookhaven. The technical program committee was co-chaired by Kerstin Kleese Van Dam, director of the Computational Science Initiative at Brookhaven, and Inder Monga, director of ESnet at Lawrence Berkeley National Lab.

In parallel with the growing interest and investment in creating viable quantum computing technologies, researchers believe that a quantum Internet could have a profound impact on a number of application areas critical to science, national security, and industry. Application areas include upscaling of quantum computing by helping connect distributed quantum computers, quantum sensing through a network of quantum telescopes, quantum metrology, and secure communications.

Toward this end, the workshop explored the specific research and engineering advances needed to build a quantum Internet in the near term, along with what is needed to move from today's limited local network experiments to a viable, secure quantum Internet.

“This meeting was a great first step in identifying what will be needed to create a quantum Internet,” said Monga, noting that ESnet engineers have been helping Brookhaven and Stony Brook researchers build the fiber infrastructure to test some of the initial devices and techniques that are expected to play a key role in enabling long-distance quantum communications. “The group was very engaged and is looking to define a blueprint. They identified a clear research roadmap with many grand challenges and are cautiously optimistic on the timeframe to accomplish that vision.”

Berkeley Lab’s Thomas Schenkel was the Lab’s point of contact for the workshop, a co-organizer, and co-chair of the quantum networking control hardware breakout session. ESnet’s Michael Blodgett also attende the workshop.