This news release was originally published by the National Renewable Energy Laboratory.

We can currently link models and simulations across the national laboratory complex, but imagine connecting these models with equipment, devices, and scientists so they can work together as if side by side instead of thousands of miles apart. In a future like this, researchers could run experiments that leverage thousands of devices to model the millions of devices that make up our increasingly complex energy systems. 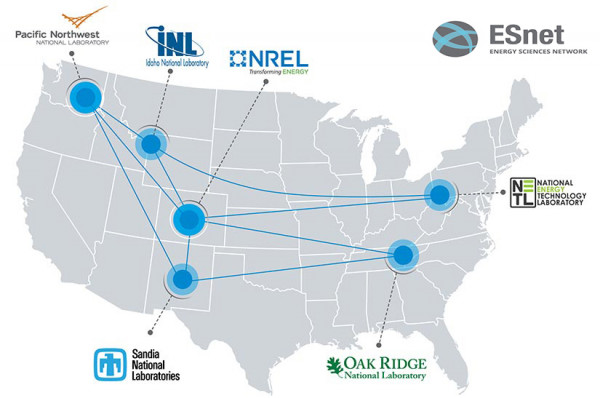 With such resources, labs could simulate, for example, the electric grid of California and validate control strategies to best serve critical loads during outages caused by wildfires.

"The vision to connect lab assets via a high-speed network started with the RT-SuperLab project," said Juan Torres, NREL associate laboratory director for Energy Systems Integration. "The ARIES team at NREL and our DOE and lab partners are building on that project. The goal is to create a network that can support large-scale energy system research and experimentation. This is critical in order to get in front of the challenges—and develop solutions—for a clean energy future."

The SuperLab That Started It All

In September 2017, researchers performed a demonstration called the Global RealTime (RT) SuperLab. A total of eight laboratories across two continents used a Digital Real Time Simulation (DRTS) system connected over the internet for the demonstration.

The first SuperLab experiment was successful, but it uncovered a problem: in a word, latency. Latency is a measure of delay, and in this case, it was in transferring data using a standard internet connection across thousands of miles. Not only was latency in this experiment sometimes large, but it was also unpredictable. That variability made it difficult for researchers to conduct a meaningful experiment.

"Consistent latency is critical because without it we can't develop filters that enable large systems to talk with each other," said Rob Hovsapian, a research advisor with NREL.

The Latency Fix: The Office of Science's ESnet

After the first SuperLab experiment, researchers began the search for solutions that would correct for latency and allow labs to run experiments together as if side by side.

That is where the U.S. Department of Energy's (DOE's) Office of Science's network facility, the Energy Sciences Network (ESnet), came in. ESnet is a high-performance, unclassified national network built and dedicated to support scientific research. ESnet has made critical contributions not only for the national laboratories but also internationally, including supporting the Large Hadron Collider, the world's largest and most powerful particle accelerator.

"OSCARS deftly cuts through scientific network scheduling complexity and can reserve as well as automatically configure a reliable, customized set of network connections in a matter of minutes, not weeks," said Inder Monga, division director at ESnet. "In addition to science applications, OSCARS provides network operators the ability to dynamically provision dedicated backups, should their network experience unforeseen outages."

Putting the Theory Into Practice

In early December 2021, NREL's ARIES researchers teamed up with the Pacific Northwest National Laboratory (PNNL) and ESnet staff to demonstrate these capabilities during their live demonstration of a Cordova, Alaska, microgrid modeling experiment.

The December multi-laboratory demonstration showed that advanced control systems in the Cordova microgrid could allow it to maintain power to critical resources like the hospital and the airport during an extreme weather event and loss of some of its hydropower resources. During this tightly coupled experiment, NREL simulated the Cordova microgrid while PNNL simulated the advanced control systems.

This first-of-a-kind demonstration brought together the best of the laboratory complex, showcasing the ability to integrate expertise and capabilities at multiple DOE laboratories to address unique challenges that no one laboratory could address on its own.

ESnet provided a reliable, low-latency connection so that research equipment at the two laboratories could exchange frequent command and control information. The round-trip latency between NREL and PNNL was 24 milliseconds, with a variance of approximately 0.02 milliseconds. The average latency in the original SuperLab demonstration was about 27 milliseconds with a variance of about 11.5 milliseconds. The very low latency variance was vital to the research success and made exchange of command-and-control information between the two laboratories in the December demonstration nearly deterministic.

Stepping Into the Future of Energy Experimentation

Future energy systems are increasing in complexity, demanding experimentation that reflects those conditions. On the heels of this successful demonstration, NREL's ARIES researchers and laboratory partners are already working toward the next step. The team is looking to connect six national laboratories for experiments that use and model millions of interconnected devices. These experiments would be called "SuperLab 2.0."

This would allow researchers to run simulations like the Cordova microgrid, but at a scale that reflects the complexity of a regional or national energy system.

Such an advanced research network could better identify solutions for city- and region-level problems. These experiments might include outages caused by extreme weather events or a cyberattack. It could also help energy systems managers who are adopting new technologies that rely on interconnected devices, so they can be assured that there are proven solutions to challenges that may arise.

"As communities, utilities, and other stakeholders work together to transition to a clean energy future, the research capabilities demonstrated will reduce the risk in this transition and ensure that our future energy system is affordable, reliable, resilient, sustainable, and secure," said Kevin Lynn, director of grid modernization in DOE's Office of Energy Efficiency and Renewable Energy.

For further information on this demonstration, please contact Rob Hovsapian or Steve Hammond with the National Renewable Energy Laboratory.