Science DMZ at the University of Florida

ESnet’s network design pattern, called the Science DMZ, solves local area network problems so that science researchers can more effectively use fast research networks to transmit large amounts of data. The Science DMZ allows data transfers to flow through a dedicated portion of a local area network thereby accelerating the data transfer rate. By enabling this functionality, scientists can spend their time doing research instead of waiting for data to arrive by portable media or by slower commodity networks.

University of Florida Takes the Science DMZ to the Next Generation

Spanning 2,000 acres of Gainesville Florida, The University of Florida (UF) houses more than 150 research centers and institutions. They are known for their pioneering efforts in both networking and computing to facilitate science and health care research. As early adopters of ESnet’s Science DMZ in 2004, originally called a Campus Research Network, UF offers a unique study of the Science DMZ as they have gone through a second upgrade to their infrastructure.  This was to accommodate an increase in data-intensive research, as well as computer science and network research.

UF’s original Science DMZ implementation was motivated by the oversaturation of their local network . Their network infrastructure contained two main campus networks that were both were flooded with too much data. With upgraded network bandwidth between 10 and 20 gigabits per second (Gbps), coupled with the Science DMZ infrastructure, UF achieved two smooth and efficient networks with a 20x increase in performance.

However, with the first Science DMZ implementation approaching its 10-year anniversary, current data rates have already outgrown UF’s first generation Science DMZ. Additionally, in 2008 the High Energy Physics community began operating the Large Hadron Collider (LHC), which produced hundreds of terabytes of data for physicists and students to analyze. While being one of the collaborator sites for the LHC’s Compact Muon Solenoid (CMS) experiment, UF became and still is a hub this LHC data. As a Tier 2 site, the campus network is responsible for receiving, processing, and transmitting hundreds of terabytes worth of data just from the CMS experiment alone. As data rates continued to grow across LHC and other research domains, by 2011 UF had outgrown their bandwidth capabilities, thereby making research workflows incredibly slow.

UF participates in several collaborations that support high performance computing (HPC) within the university, state, and across the country. One example is the Open Science Grid (OSG), which provides grid applications for computing. OSG applications are available at UF for use by both local and remote users, which means the campus required a high-performance network connection to ensure an efficient pipeline for the processing of the data. 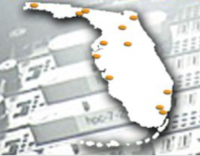 As a result of the Science DMZ upgrades, The University of Florida and other partners within the state have formed the Sunshine State Education & Research Computing Alliance (SSERCA).  This organization enables and facilitates collaborative research projects along with the sharing of diverse computing resources available at all sites. The organization’s primary support activity consists of sharing data by multiple means as appropriate: i.e., mounting file systems, replication, and high-speed transfer. In this way, researchers from any science discipline and from geographically diverse locations have access to a wider set of computing resources.

In addition to providing greater bandwidth for researchers, the UF Science DMZ upgrade also allowed the university to participate in emerging opportunities, like the Internet2 Innovation Platform which includes a connection to new software-defined networking resources that provide more efficient mechanisms for traffic management. Building the Innovation Platform connection was funded through the 2012 Campus Cyberinfrastructure–Network Infrastructure and Engineering Program (CC-NIE, award 1245880), a highly competitive grant that is helping dozens of universities to upgrade their infrastructures. 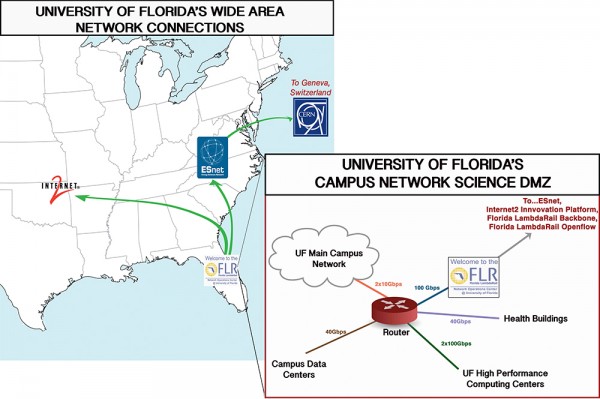 The Science DMZ topology is a star and only connects to the other campus networks at the point of entry from the Internet.