The Next Generation ESnet 100Gbps Infrastructure

ESnet is a high-performance national network built and engineered specifically for the purpose of  science data transport. ESnet connects more than 40 Department of Energy research sites, including the entire National Laboratory system, its supercomputing facilities, and its major scientific instruments. ESnet also connects to 140 research and commercial networks, permitting tens of thousands of DOE-funded scientists around the world to collaborate productively.

ESnet recently upgraded to its fifth generation backbone  from a 10 Gigabit per second platform to a nationwide 100 Gbps network. The network was completed in 2013 and was built in collaboration with Internet2. Internet2 and ESnet have deployed a massive 8.8 Terabit network built on the Ciena’s 6500 Packet-Optical Platform which the two organizations are sharing to serve the entire US Research and Education community. In addition, ESnet has worked with Alcatel-Lucent to deploy 100G capable routers across the backbone.  The new network provides an immediate tenfold increase in bandwidth to DOE research sites with the ability to scale to 44 times the current capacity. 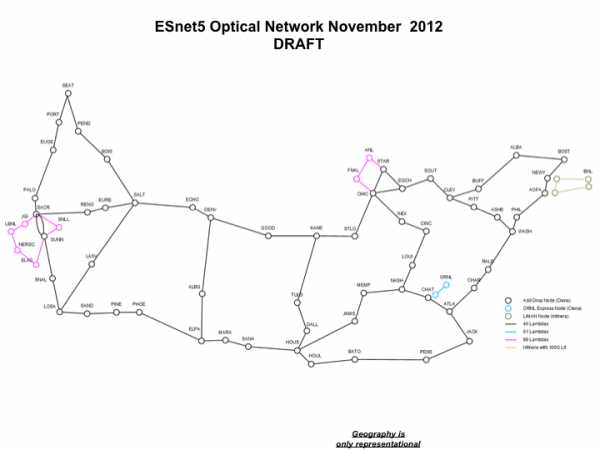