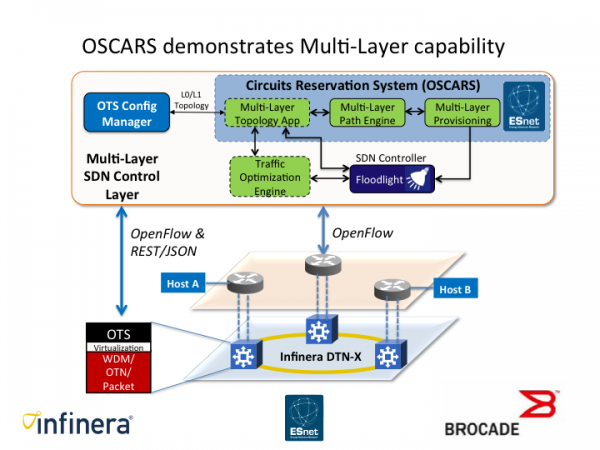 Figure: The image is a notional diagram depicting a demo of multi-layer provisioning and optimization using OSCARS and SDN technologies .

OSCARS is widely considered a pioneer in the development of Software Defined Networking (SDN), a generic term for the ability to quickly provision network connections on-the-fly, using software rather than manually configuring policies or equipment in the connections path. OSCARS is playing a vital role in the development of OpenFlow, a relatively new protocol that allows the path of network packets through the network of switches to be determined by software running on the network routers. By separating the so-called "control plane," OpenFlow allows for more sophisticated traffic management than is feasible using traditional routing protocols. The developers of OSCARS are working with major network vendors like Infinera and Ciena on prototyping ways to integrate these services into their commercially available offerings.

More information about OSCARS and future technology developments can be found in a number of press releases and video clips, including: