Screenshot from the training video on deploying perfSONAR.

The Department of Energy’s Energy Sciences Network, or ESnet, and the Network Startup Resource Center (NSRC) at the University of Oregon are teaming up to create an extensive video training library to help organizations improve the performance of their networks by deploying the perfSONAR network measurement tools and the Science DMZ network architecture for secure, high-speed data transfers at institutions such as universities.

One of the first institutions to benefit from the project will be the University of Guam. NSRC staff are flying to the U.S. territory in the Pacific on July 25 to help the university improve its campus network and set up a high-speed link to the University of Hawaii. Prior to the weeklong workshop and perfSONAR installation, NSRC staff will have the six campus network engineers familiarize themselves with the toolkit via the video library.

“Working with colleagues from Indiana University, we helped them roll out the whole network, installing perfSONAR boxes in PoPs (points of presence) around the country,” said Hervey Allen, NSRC’s program manager. “We’re really excited to see if people can watch the videos, then install and run perfSONAR, or, if they are using it for basic tests, they can understand the data and what it means. The whole idea is to help them use the tool better.”

ESnet is one of the original developers of the perfSONAR toolkit, which has provided the research and education (R&E) networking community with tools for end-to-end monitoring and troubleshooting of multi-domain network performance. Other current partners in the perfSONAR project are Internet2, Indiana University and GÉANT, the pan-European research network. The perfSONAR collaboration over the past 11 years has also included Fermilab, SLAC, Georgia Tech, the University of Delaware, the ATLAS Great Lakes Tier 2 team at the University of Michigan and RNP in Brazil.

Created in 1986, ESnet is a DOE Office of Science User Facility managed by the Department of Energy’s Lawrence Berkeley National Laboratory, operating a 100 gigabits-per-second backbone network linking more than 40 DOE research sites, including the entire national laboratory system, its supercomputing facilities and its major scientific instruments.

“We’ve developed a good working relationship with NSRC over the past several years, and we started talking about this video project in early 2015 as a way to efficiently transfer ESnet’s expertise to anyone interested in network performance, from DOE scientists to other research organizations,” said ESnet’s Eli Dart, who developed the Science DMZ architecture and will appear in a series of related training videos. “They do a lot of good work in all corners of the world, helping research organizations in emerging economies around the world get up to speed fast and help them bootstrap the development of  science networks where it was not possible before.” 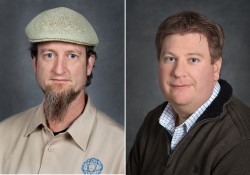 Funded by the U.S. National Science Foundation (NSF), the NSRC works directly with the local network engineers and operators who develop and maintain the Internet infrastructure in their respective countries and regions by providing technical information, engineering assistance, training, donations of networking books, equipment and other resources. The end goal in this work is to make it easier for local scientists, engineers and educators to collaborate via the Internet with their international colleagues by helping to connect communities.

“These days, the whole world goes to YouTube when they want to learn something,” said ESnet’s Brian Tierney, who appears in the perfSONAR videos along with Jason Zurawski. “Hopefully both the NSRC and the DOE community will find these videos a useful way to get started and then follow up with more in-depth information as needed.”

Although perfSONAR was developed and is used mainly by large, high-speed R&E networks, it’s also a valuable tool in fledgling networks in developing nations where network bandwidth is expensive and perfSONAR can help local researchers make the most effective use of that investment.

NSRC Director Steve Huter ticked off a list of countries where the organization has helped build networks and train engineers, often using donated equipment and documentation: the NREN of Senegal, a regional research and education meeting hosted by the NREN in the Philippines that brought together 19 Asian nations earlier this year, the research and education communities of Zambia, Ecuador, Uganda and the Central Asian republics of the former Soviet Union, plus many others. 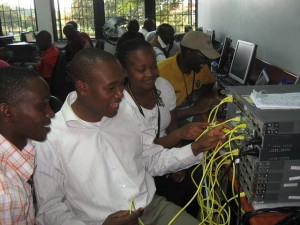 “One of the great success stories is KENET, the Kenya Education Network, which is the national R&E network,” Allen said. “Like many countries, Kenya first connected to the Internet via the national telco with low speed at a high cost; with the establishment of KENET and robust relationships between academia, government, industry and infrastructure providers, they are now are a leader in showing Africa how to build an efficient and affordable network.”

“The idea from ESnet and NSRC to do these training videos makes sense – this is knowledge dissemination in the 21st century, in this case from subject matter experts on an important measurement element of R&E networking,” said Kevin Thompson, program manager in the National Science Foundation’s Division of Advanced Cyber Infrastructure, which funds the NSRC. “And this approach makes the content available to everyone.”

Zurawski, ESnet’s perfSONAR evangelist, has presented tutorials at dozens of workshops, often in segments lasting 20 minutes or longer. But increasingly, he’s noticed that people want to know quickly how to do something, “not look through some giant manual.”

So ESnet was thinking about how to create quick, two- to five-minute lessons for various aspects of perfSONAR, Zurawski said, “like how to test this metric and what’s this data mean? We’d worked with NSRC staff over the years, so it seemed like a good idea to link together.”

Zurawski said it was a challenge for him and ESnet’s Brian Tierney to boil their usual talks down to five minutes or less – their first dry run was 20 minutes.

“So we tried to rewrite it into two-minute chunks to create very succinct videos that allow you to jump right to the topic you’re interested in,” Zurawski said.

There are now 29 videos in the perSONAR library, including a high-level introduction to configuring, metrics and measurement.

“It was an interesting experience, and you have to think a lot differently about how you’re going to present the material than if you’re giving a live talk,” Zurawski said. “We’re all excited to get the information out there and to help organizations of all sizes feel confident in getting their feet wet with the technology.”

Up next: Science DMZ

With the perfSONAR videos wrapped up, the team will now focus on the library of 12 Science DMZ videos, of which a few are already available. The Science DMZ architecture provides a secure, dedicated network connection for moving massive research datasets that may otherwise be slowed to a trickle by typical network designs. Dart, who will appear in the videos, recognizes that developing nations may not have the need or resources to deploy full-scale Science DMZs.

“The nice thing is that this is all modular and can be deployed incrementally, so institutions don’t have to jump in with both feet all at once,” he said. “They can start small, and as they are successful, extend to other projects.”

“We’re working to connect new countries, new networks and new people to the global research and education network fabric, extending the benefits of high-end science and eliminating obstacles to research collaboration with the U.S., Europe and within regions as well,” he said. “We’re crossing international boundaries and scientific domains as we build both physical network and human connectivity.”

Since working with the African Regional Centre for Computing (ARCC) and the NSF in the early 1990s, the NSRC helped Kenya establish its first TCP/IP link to the Internet in 1995, and then helped Kenyan colleagues build out its first phase of KENET, starting in 1999.

Today, KENET connects and provides network services to more than 150 organizations, including universities, government agencies, research institutions, hospitals and some secondary schools. KENET in turn is part of the regional Ubuntunet Alliance, a networking group of 14 African nations operating in eastern and southern Africa, with funding support from the European Commission. Ubuntunet connects in London to GEANT and Internet2, providing high speed linkages to European and U.S. universities, thereby giving Kenyan researchers strong links to scientists on two other continents.

“With colleagues at Indiana University, we helped them build the performance monitoring system, installing perfSONAR boxes in PoPs (points of presence) around the country,” Allen said. “This helped us find a misconfigured router in the heart of the network, which, when fixed, provided an immediate boost in performance.”

Huter said that KENET staff told him they love to come into the office and look over the perfSONAR logs, which give them an enhanced understanding of their network and the ability to grow and build a better network with the same number of staff.

“perfSONAR has made it possible for KENET NOC engineers to monitor the quality of links between  Kenya and the U.S. that support collaborating researchers,” said KENET Executive Director Meoli Kashorda.” This is a very important service for the researchers as well as our NOC engineers who are then able to quickly diagnose and resolve end-to-end network problems.”

According to KENET Lead Network Engineer Kennedy Aseda,  KENET uses the perfSONAR toolset to have more visibility of the network throughput, latency and packet losses between KENET’s main distribution points to the regional PoPs.

“We have also been able to immediately identify and resolve packet loss and throughput problems on the KENET backbone network arising from deteriorated fiber before they severely impact the network, Aseda said. “This has led to better response times to impending faults as well as more knowledge of impending network issues that could affect the backbone network serving Kenyan universities.”