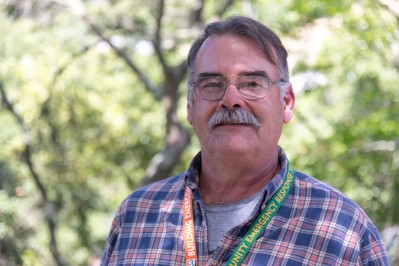 Scott Mason is retiring after 20 years with ESnet.

Until Scott Mason joined ESnet in 1999, he’d never actually had a job interview, though he already had a long and interesting career behind him. Mason joined the Navy right out of high school and became a specialized saturation diver working on heavy salvage—sunken ships and fighter planes. After eight years in the Navy, Mason was recruited to work as a diver for the oil industry, installing and repairing oil platforms and subsea pipelines. When the price of oil collapsed in the early 1980s, Mason went back to school to study computer science. He interned for Chevron during his studies and they hired him on as an employee the day after he graduated.

Years later, a conversation with another father at his son’s Boy Scout meeting led Mason to Berkeley Lab. After an informal visit, Mason was invited back for a second interview at ESnet—when he was offered a job, the decision was easy. Mason had survived three layoff cycles at Chevron and was ready for a change.

“I had come from the corporate oil industry,” said Mason. “At ESnet I was looking at a group that was much smaller, with people who liked each other and took pride in what they were doing.”

He started off doing PC and server support. “At that time, ESnet was so isolated from the Lab that we had our own computer support and purchased our own equipment,” said Mason. “LBL was one of our customers just like all the other Labs; we treated them the same way we treated everyone else.”

After a few years, Mason moved into the ESnet networking group, working as part of the Operations and Deployment team. His work involved a lot of travel around the country to install ESnet systems.

“I liked the days when I used to travel to New York and Boston frequently, but it has also been interesting to see the ESnet design evolve and the tools and hardware to support it also evolve,” said Mason.“Now the vendor we purchase from ships the equipment directly to the site, where it is installed by local technicians.”

Mason recalls how the small ESnet group he joined in 1999 has now evolved into a nationwide network of employees, much as ESnet itself has grown over the years he’s been with the group. “Now when we have staff meetings, it’s like Hollywood Squares on the video conferencing screen,” he jokes.

Mason will retire on June 27 after 20 years with ESnet. When asked what he’ll miss the most about his work here, he immediately replies: the people. “It’s fun to come to work because I work with such great people,” Mason added.

Just as he did throughout his career, Mason plans to stay active in his retirement.

He has a long to-do list of home projects and another long list of travel plans. He and his wife plan to visit all the national parks they’ve been meaning to get to. And Mason is really interested in history, so at the top of his list is a trip that will start in Astoria, Oregon on the Columbia River and then follow the Columbia and the Lewis and Clark trail back to Missouri.